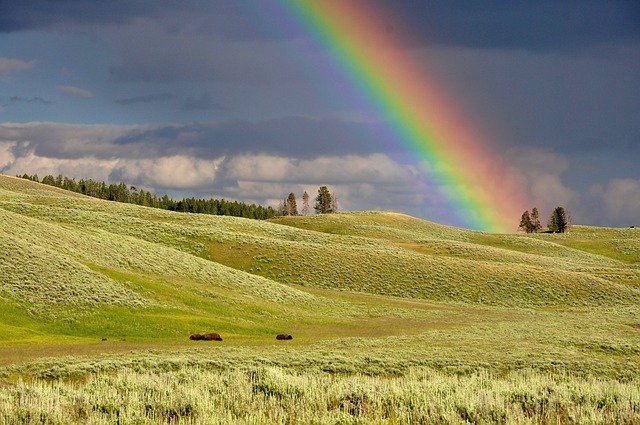 A new beginning for the human race. God instructs Noah and his family to be fruitful and multiply and fill the earth. All the humans on earth would stem from Noah’s family.

God bless Noah and his sons.

God gives humans both the vegetation and animals for food

God gave explicit laws, not to commit murder or suiside. God demands accountability for the lives of fellow humans from humans. Man is now suppose to be his brother’s keeper

God established a covenant with Noah not to destroy the earth by flood. The symbol of the covenant is the rainbow.

Whenever I bring clouds over the earth and the rainbow appears in the clouds, I will remember my covenant between me and you and all living creatures of every kind. Never again will the waters become a flood to destroy all life.

This is the sign of the covenant I have established between me and all life on the earth.

All the humans on earth would stem from Noah’s family. A blessing from God. God permitted humans to include animals in their diet. However, man must not take away his own life, or that of another human being. Doing so dishonour to God who made humans in his own image. Man became his brother’s keeper. To preserve human life  not to take it.

When the rainbow appears in the sky it would remind God of His covenant not to destroy all earth by flood waters and also humans of the faithfulness and mercy of God. The rainbow symbolises God’s covenant to portray mercy

Everything in moderation. Noah took excess of wine and became drunk and nake. Ham instead of covering his father’s shame didn’t. So Noah cursed Cannan.

Children tend to learn of different colours through the rainbows, it will be great to point them to why we have the rainbow. During the period of the covid-19 lockdown, many starting with children used the symbol of the rainbow, as one of hope and mercy, others as a thank you message for the health workers.

God gave the rainbow as  a reminder of mercy

Whenever I see the rainbow it reminds of this passage of God’s mercy to the human race.

It’s a sign to God’s mercy and a reminder for me to be merciful unto others.

doing well is God’s blessing. On him we depend, to him we should be thankful. We need to be very careful when we enjoy God’s good blessings plentifully, lest we use them to excess and abuse by gluttony or  drunkenness.

Noah a righteous man erred. People say and do that when drunk, which, when sober, they would blush to think of. Drunkenness exposes men to contempt

However, scriptures tells us in 1 CORINTHIANS 10:12

So, if you think you are standing firm, be careful that you don’t fall!